Quilling, the practice of inebriating voters to get their backing at the polls, has gained a place in the Oxford English Dictionary. 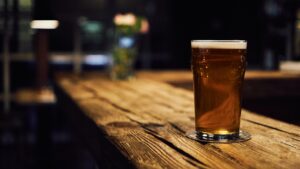 A new word for alcohol-fuelled electioneering has been officially added to the dictionary thanks to the popularity of boozy voting in the past.

For hundreds of years the drink flowed when people chose their parliamentary representatives – paid for by those who wanted to get elected. Now a new word historically used to describe this – quilling – has been added to the Oxford English Dictionary.

The word is thought to refer to the use of a quill-type implement to get alcohol out of a barrel and was particularly used in Exeter, where elections were fiercely fought, and Devon. Quilling led to violence and locals being accused of debauchery. This “treating” is now banned under electoral law.

University of Exeter historian Dr Todd Gray applied for the word to be added to the OED after finding it in numerous documents he had used as part of his research into Exeter and Devon. After submitting his evidence, and a two year wait, quilling is now officially listed in the influential dictionary.

Dr Gray thinks quilling was most common from the early 1700s through to the late 1800s.  The word was defined in 1853 as `a very old term for social meetings of the electors at which there is drink of course’.

Quilling sometimes even took place in public places. A hogshead of cider was commonly set up for electors outside St Lawrence’s Church in Exeter’s High Street. A blue flag hoisted on the church told people about the party.

In 1853 during one evening of quilling at one public house in Exeter two days before the election the sixty invited voters had 246 glasses of grog while 25 quarts of beer were given to labourers unable to vote but could make a public show of support.

Dr Gray said: “Quilling was a term, but not a practice, confined to Exeter and parts of Devon, and such bribery was common throughout the country. We know from reports that it encouraged violence and people living in Exeter were mocked by their enthusiasm for partaking of this hospitality. They did so because elections in the city were notoriously violent and contested.  In 1761 a husband murdered his wife because they supported different parties.  He subsequently attributed his actions to the `heat’ of the liquor.”

The earliest definition of quilling was written in 1738 by Exonian Andrew Brice who noted the “running of the quill”. He said:

“When the rabble have liquor given them before, at or after elections, they say the Quill runs at such or such a house and they getting themselves drunk by it they call Quilling or drinking upon the quill.  I conjecture it had its origin from a quill being used for the liquor’s running through from the meshing vat in brewing. Nor is it indeed impossible but a quill was heretofore used here instead of a modern brass cock, or wooden faucet; we still say Put the Jug, etc. to Pen, when we’d signify the having it run from the hogshead immediately into the jug.”

Alexander Jenkins, author of a History of Exeter in 1806, wrote the “pernicious practice of quilling” happened during the city’s election in 1790. He said this caused the candidates “enormous expense” and had “more injury than benefit to the electors”.

Exeter was ridiculed in 1841 by the Monthly Magazine for quilling, and described the excessive amounts spent by one candidate on “the beef and pudding feed you gave the unwashed dolts at Exeter – the very Sodom & Gomorrah of political corruption”. The journalist decried Exeter as “that sink of corruption and church-pestilent thimble-riggery”.

The OED official definition of quilling says it is slang, and “English regional (South Western) and now historical and rare. It says quilling is: “The action or practice of bribing electors in order to gain their votes, especially by providing free alcohol; (also) the action of drinking such alcohol.”

In 1859 the Western Times reported: “Tory quilling in St. Sidwell’s is doing its work effectively. Last week, a burgess, who had imbibed too freely of the gratis potations.., has lost his employment!”