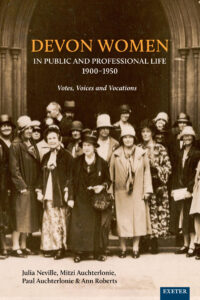 This book is one of the first to study the role of women in public and professional life from a regional point of view. It breaks new ground in considerations of gender in the early twentieth century and the history of Devon in the modern period. The eight women are:

An Early Bird discount price is available till 1 Dec 2021.

Email Julia Neville, j.f.neville@btinternet.com for details of the discount code.