In the picturesque village of East Budleigh a statue of Sir Walter Raleigh looks down on the winding High Street, reminding us that this was the birthplace of the celebrated explorer and favourite courtier of Queen Elizabeth I.

Not so many people know that East Budleigh was home to a second Devonian pioneer, born in the village a generation or so after Raleigh. His voyage across the Atlantic just a few years after the sailing of the Mayflower added significantly to Britain’s links with the New World.

Roger Conant is remembered for his attitude of tolerance and conciliation among the early settlers of New England. This was demonstrated when in 1625 he intervened in a dispute between some West Country fishermen and a group of Puritan separatists led by their pugnacious military officer Myles Standish. The episode in which Conant averted certain bloodshed has been commemorated in this fine painting recently completed by Budleigh Salterton artist John Washington. 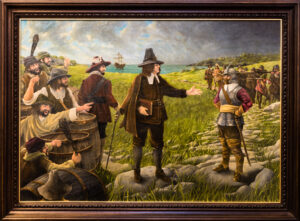 A few steps from the village’s ancient All Saints’ Church you can see a large millstone said to have come from the mill leased by the Conant family. It’s near this spot that a group of local residents plan to set up a blue plaque marking the 400th anniversary of Conant’s voyage. Prints of John Washington’s painting, aptly entitled ‘Blessed are the Peacemakers’, are available. Profits are going towards the cost of the plaque.

Some of Roger Conant’s American descendants are aiming to be in East Budleigh for the Queen’s Platinum Jubilee celebrations on Sunday 5 June. Raleigh’s attempted settlement in the New World was a failure but Roger Conant is seen in Massachusetts as the founder of the city of Salem, originally named Naumkeag.

The idea of a plaque has delighted members of Salem Historical Society. Its President, Robin Woodman, will also be coming to the UK in June. ‘I would love to come and see it in situ,’ she wrote. Professor Stan Roberts, Chairman of the RC400 group in East Budleigh, is hopeful that the American visitors will not be disappointed.  ‘It would be so good if we could have the plaque in place in time for their visit,’ he commented.

In later life Roger Conant showed his affection for his birthplace by petitioning for the town of Beverly where he settled to change its name to Budleigh, but sadly he was unsuccessful.

Can you help with fund-raising so that the blue plaque can be set up in time for the visit of Roger’s descendants? Contributions are welcome via: