Home » On the Beach at Dawlish 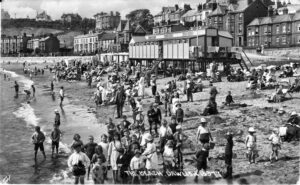 This picture shows a busy Dawlish town beach on a sunny day sometime in the early 1920s. The difficulties of the First World War are over, and people are out to enjoy themselves. They may be locals, or day trippers down on the train from Exeter or further afield. To our modern eyes the picture appears strange because of the costumes that adults and children are wearing. They look overdressed for the beach, even though many of the skirts are shorter than they would have been ten years’ earlier. The men are even more formally dressed and include two gentlemen in three-piece suits, and one in a bowler hat.

Rules of seaside behaviour had begun to ease early in the 1900s, and sexual segregation on beaches gave way to ‘family bathing’ and then ‘mixed bathing’.  Sitting on the beach while the children paddled and built sandcastles became normal but the idea of wearing ‘bathing costumes’ for anything other than ‘bathing’ came in only gradually during the 1920s. In the picture the only person actually wearing a bathing costume is standing in the doorway of the bathing pavilion, and may possibly be performing the role of lifeguard, in case one of the paddling children gets into trouble. The towels and costumes drying on the rail do show that some venturesome spirits had been in for the ‘Dawlish Dip’.

The picture was reproduced as a postcard by local firm Chapman & Son postcard; the distinctive back sloping writing was by Lilian Chapman and the photographer was probably her brother Stanley. To take the picture it appears he was balanced with his heavy glass plate camera on top of a high ladder, and this has attracted the attention of the assembled children in the foreground.

In the middle of the picture is the Bathing Pavilion. This was built in 1880 as the Ladies’ Bathing Pavilion, and originally consisted of a row of 30 changing cubicles with a central corridor, a ‘Reading Room’ with daily newspapers and periodicals, a piano for entertainment, a small laundry and a ticket office. After serious storm damage in 1891 the pavilion had to be partly reconstructed and after a further storm in 1915 the ‘Reading Room’ section was pulled down. The building was then used by both sexes. The pavilion was eventually demolished in 1940 under the peculiar notion that it could somehow assist a German invasion.