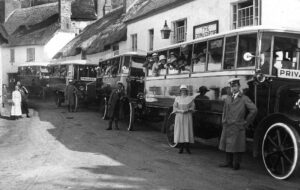 Local church and chapel members in Newton St Cyres turned out to join the combined United Methodist and Parish Church Sunday Schools outing, or to watch its departure, on Tuesday, 1 July 1924. The clear shadows cast by the roofline of the old Crown and Sceptre show how lucky they were with the weather – just the kind of day for a seaside trip.

The photograph shows the four large buses which had been chartered for the day. Mr Cornish is the driver of the lead bus, and Miss Gladys Cole, beside him, was one of the organisers. The Coles lived opposite the Crown and Sceptre, where Mrs Cole (in white) is standing in the photograph. Walter Cole, who ran a smallholding where the village car park is now, also kept cows and had a local milk delivery business with a horse and cart. Gladys’s sister Win, and Miss Win Harris, daughter of the landlords of the Crown and Sceptre were also involved in making arrangements for the trip. George Rowe of Cartaway Farm, the young man with his head sticking out of the window of the leading bus, was another of the organisers.

The buses drove via Exeter over Haldon Moor, where the scenery ‘attracted much attention’, and through Kingsteignton to their first stop at Teignmouth for lunch, boating and other amusements and a ‘splendid tea’ at Jervis Café. Then it was back via Dawlish, where another two hour stop was made, and home through Starcross, Exminster and Alphington. Buns, oranges and sweets were handed round and home was reached at half past nine.

This postcard, published in the Newton St Cyres Millennium book in 1999, was supplied by local postcard collector Tim Sedgwick and was taken by Brinicombe, a local photographer.

Unfortunately the Crown and Sceptre was burnt down in 1962, together with the thatched cottage beyond it so the scene is not immediately recognisable today. The house at the far end, until recently the post office, remains.