Devon History Society is collaborating with the Devon Family History Society and the South West Heritage Trust on a new research project to explore what life was like in Devon in the 1920s. We are interested in hearing from anyone whose family lived in Devon during that period and who have memories to share. We’d also like to hear from individuals or groups who might be interested in researching what was happening in their community, or in a particular topic. Our key themes for topic-based research are:

The Google map below shows the principal location of people resident in the 1920s whose biographies have been contributed to the ‘Devon in the 1920s’ project. For further information about these histories, or if you would like to be part of the research project in any way, please get in touch with the Project Manager, Julia Neville, at j.f.neville@btinternet.com.

Clicking the symbol, top LH corner of map, opens a panel listing the names.  Clicking on a name highlights the pin indicating the address where that family resided.

Open the map full screen by clicking the square box in the top RH corner.

During the 1920s more people than ever before began to enjoy going out to a café or tea rooms for lunches or teas or celebratory meals.  In Devon, these establishments served not only local people but large numbers of visitors and tourists.  Devon delicacies were a well-known draw – popularized in Devonshire dialect as Zoider, Junket and Crame, Ogs Pudden, ‘Ome Made Cake, Abble Dumplins … and then of course there was the popular Cream Tea or the more unusual Laverbread.

The number of establishments serving food and drink in Devon grew, and some of the places that were well-known in the 1920s are still there now. Our map illustrates popular spots around the county, and we’d welcome information about the cafes shown or any others with which your family might have had a connection, celebrating a wedding, serving farmhouse teas … whatever it might be.  If you can help please get in touch with the Project Manager, Julia Neville at j.f.neville@btinternet.com 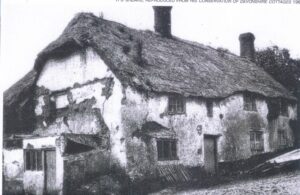 Some 525 cottages in Devon were restored according to the generous provisions of the 1926 Housing (Rural Workers Act) between 1926 and 1930.