14 December 2018 was the centenary of the first day on which women in the UK cast their votes in a General Election. (Well behind New Zealand, where women had been doing that since 1893, but we got there!) Devon History Society helped celebrate this momentous event both nationally and locally.

Nationally Historic England launched a new page on their website, Nine Places that tell the story of Suffrage Activism in Devon.

Click on the image above to view the webpage

The page uses work done by the Devon History Society research group to feature some of the places associated with the activists and to publicise the fact that we have now ‘Enriched the List’ for 41 listed buildings in Devon by adding information about the women involved. The launch also gave the Society good national publicity. Liz Clare, the Local Engagement Adviser for Historic England, who set up the page and tweeted about it on the day commented afterwards that “There have been thousands of ‘engagements’ (users liking, retweeting or clicking on the links), which is exactly what we hoped for.”

Locally, Devon History Society also supported an event organised by Devon County Council for Vote 100 here, held at County Hall on 14 December. A number of schools were given a chance to take over the Council Chamber and the ante-room next door featured an exhibition with information about the development of the democratic process, including our Suffrage Activists map and biographies. 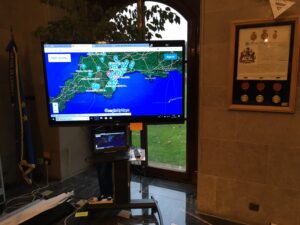 The project is now nearing an end, with over 100 of the full biographies up on-line here, and plans to print and make these available through local archive centres as well. We’ve uncovered some new and unexpected stories: the Devon violinist who played at the Proms; the Devon woman who became mistress of Girton College; the Devon woman who set up a Co-operative Housing scheme … and more. The research group has had an initial discussion about how to draw our findings together to tell the story of Devon’s contribution to the movement. Watch this space.