On Thursday 30th September, family, friends, professional collaborators and admirers of the great photographer of rural Devon, James Ravilious, gathered in Chulmleigh to witness the unveiling of a Devon History Society blue plaque in his memory.  The plaque can be found on the house in New Street which he and his family occupied from 1987 until his death, at the age of 60, in 1999.  Following an introduction by the Chairman of the Devon History Society, the Reverend Dr Andrew Jones, the plaque was unveiled by James Ravilious’s widow and biographer, Robin, and his children, Ben and Ella. 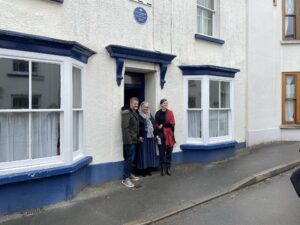 Following the ceremony, guests assembled in Chulmleigh Town Hall to hear speeches from the Reverend Peter Beacham and Emma Down.  Peter Beacham, who is a former Heritage Director for English Heritage and a South West Heritage Trust Trustee, worked with James Ravilious on their book Down the Deep Lanes, while Emma Down is an archivist who was employed by Beaford Arts to catalogue the negatives of James Ravilious at the Devon Heritage Centre between 2017 and 2019.

Peter Beacham spoke humorously and movingly about the time he spent working with James Ravilious, including time spent in quarries, country pubs and examining corrugated iron.  Emma Down emphasised the size and scope of the collection and the way in which its value to researchers complements the aesthetic and artistic elements of Ravilious’s work.

The speeches were followed by some traditional Devon refreshments, including cut rounds and some delicious home baked cakes.