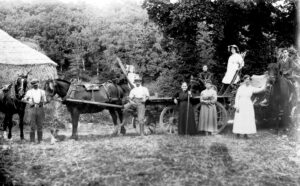 Posed for the camera, three generations of a farming family celebrate harvest home in 1920 with the sense of a job well done. Gran has put on her best dress, even if she symbolically holds a pitchfork. Her husband and son have put on clean shirts. There’s a neat thatch roof on the corn rick and the Devon harvest trolley is empty. Mum holds the cat, and the children (also in best clothes) are placed on the trolley and the horses.

Who are they? We’d very much like to know. Devon History Society wants to use this photograph as part of their gallery of images in the 1920s, and we’d like to give them their names and identify their farm. Can you help?

There are a few clues to a possible location. This photograph, see page 34, comes from a small album owned by the ‘Seale-Haynians’, former students at Seale-Hayne Agricultural College near Newton Abbot. The whole album is available on the Gallery page of the Seale-Haynians website (see ‘More photographs from the 1920s’). It’s clear that it was put together by someone who was involved with the college as soon as teaching started again after the First World War, in January 1920.

This fits with the type of location in which the Devon harvest trolley was principally used – small hilly farms such as can be found around Seale-Hayne in the triangle formed by the A38 and the Bovey Tracey and Ashburton roads out of Newton Abbot. Its high back allowed ropes on rollers to secure the load. In fact many people will remember one used as a landmark on the road in the very similar area between the A38 and Dartington, marking the turn off to Riverford.

But how the photograph got into the album is a bit of a mystery. The rest of the photographs are evidently taken inside and around the college itself, and feature the students, and the tractor trials for which Seale-Hayne became well-known.

This one doesn’t quite seem to fit. But perhaps the photographer – with some of the students – lent a hand during the holidays to help get the harvest in not just on College Farm, but on other nearby farms too. It was a tradition that all available hands were drafted in to help.

Does anyone recognise the family? Is there a matching photograph in your family album? If so, please get in touch via our contact page.